Today’s topic is: “Happy Easter! Tell us what this holiday looks like in your family.”

For the last couple of years, we’ve had a great time at my brother-in-law’s house where we mingled with family, ate delicious food, and hunted for eggs. Here are the 2014 and 2015 family pictures we took in their front yard. (Goodness me, our girls are growing fast at this stage!)

Unfortunately, this year, too many people (in both households) are feeling under the weather, so we stayed home today. (Hmmm… I wonder if we should get the girls dressed up and go over there just to take a third-year picture on their big rock.)

The girls were very excited to have an egg hunt, but with the 10 inches of snow that fell on Thursday followed by rain last night, the ground outside is a combination of slush and mud. It turned out that an indoor egg hunt was just as much fun. The real debate was over what to put into the plastic eggs. My vote was for raisins but the girls filed a petition to include chocolate instead. We ended up filling eggs with raisins, chocolate chips, or shelled pistachios. Each time they opened one, they would wiggle with excitement!

And after their morning nap, they decided to hide the empty eggs again so they could have a second egg hunt. (Not as much fun without treats, but still kept them content for about 20 minutes.)

While we missed out on all of my sister-in-law’s fantastic food, I enjoyed trying a new baking experiment this weekend.

Last Christmas, I inherited a 1940s cast iron Griswold cake mold, in the shape of a rabbit. It’s in very good condition and it weighs six pounds! It had originally been used by my maternal grandmother, who was an amazing chef and baker. She passed it to my mom more than 25 years ago and my mom never baked in it. So yesterday I began the process of re-seasoning the pans to recreate a (relatively) non-stick surface.

To reseason a rusty, old cast-iron mold, heat the oven to 275 degrees. Clean the pan very well, making sure to scrub off any dried/baked on food. Dry it thoroughly and coat liberally with solid vegetable shortening. Bake the pan in the oven for at least 15 minutes. Take the pan out of the oven and pour out the excess shortening. Then put the pan back in the oven for at least 2 more hours. Repeat this process at least twice, more if the pan was really rusty.
~  atgrandmastable.wordpress.com

Here are the before, during, and after pictures of the first round of the seasoning process, which made the whole house smell like over-cooked Crisco. Ick. Fortunately, Saturday was a warm day so I was able to open the windows to air it out.

The next trick was to figure out how to bake in it.

My initial animal-shaped-cake-induced optimism was beginning to wane.

The final preparation step was to decide what type of cake I was going to attempt. The prevailing recommendation (from the recipe book included by the manufacturer) was pound cake. But they also recommended adding 7-minute frosting (whatever that is), which would cover up the amazing fur texture produced by the mold. At this point, I figured that what I really needed was a visual benchmark to aim for. So yesterday evening, I headed to Pinterest to find the perfect example of a Griswold bunny mold cake.

Apparently, Griswold also made lamb molds, and there are hundreds of pictures of lamb cakes on the internet. (Martha Stewart even made a lamb cake!) However, after spending way too much time searching, I found dozens of rabbit mold pictures but only ONE person in the whole history of the internet who had actually baked a rabbit cake! Rarely does an online search produce such feeble results. Her cake wasn’t even standing up (like the lamb cakes do) and a huge wallop of frosting hid all potential rabbit-like qualities.

It was at this point that every shred of my naive optimism about making a recognizable rabbit cake completely disappeared. I went to bed discouraged, feeling like I had somehow let my grandmother down.

However, after a good night’s sleep, I awoke this morning with renewed positivity. I decided that if the rabbit was going to be laying down anyway, I might as well bake it that way too. So I whipped up a half batch of my favorite Wicky-Wacky Chocolate Cake while preheating and greasing the pans (although I forgot to flour them before pouring in the batter). These half-bunnies baked at 350 degrees for 15- 25 minutes.

Here are our festive (unfrosted) Easter Bunny cakes! I love their furry texture! 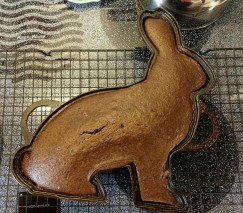 A half batch of batter was enough for the bottom mold and a thin portion of the top mold. I put a ceramic bean in the vent hole (on the left bunny’s cheek) to keep the batter from dripping out before it baked solid. Of course, the thin ears and front legs get overbaked while the thick body finishes baking through. As the cake cooled, parts of it shrank and pulled away from the pan, making removal a little bit easier. The good news is, based on my experiment today, I’m confident that a standing 3D version of the rabbit is actually possible.

Before next year, I will do a few more rounds of seasoning (to create a more non-stickable surface) and figure out the best recipe to use for a structurally sound rabbit cake statue. I’m not sure it will taste very good (I think dried ears are inevitable), but aesthetically it should be very impressive! Either way, by Easter 2017, there WILL be actual cake photos (not just mold photos) on Pinterest when you search for “Griswold rabbit cake.”

How do you celebrate Easter? Share your traditions in the comments.