Today’s topic is: “Tell us about a special memory you have of going to the beach.”

I’ve visited several memorable beaches over the years. When I lived in Boston, I took windy walks along the rocky shores to remind myself of nature’s beauty and power, something I had begun to ignore during my day-to-day work shuffle. The month I spent on the sunny beaches of Belize and Costa Rica with my hubby was a tropical dream come true. But one of my favorite memories of going to the beach is from October 1986, during the most epic of all road trips.

I was nine-turning-ten years old when my mother, sister, and I spent six weeks driving an old van down the east coast, from Vermont to Florida and back. And one sunny October day, we visited the most picturesque beach I had ever seen.

Growing up surrounded by dense forests and rolling mountains in northern Vermont, I spent the hottest of summer days splashing in the icy water of the Passumpsic River where it roared over Emerson Falls, or in the rough sand on the north end of Lake Willoughby (only briefly venturing into the shallow yet frigid water).

Yet all of a sudden, there we were in southern Florida, on a white-sand beach with the finest grains imaginable. The breeze and scattered clouds made it feel a bit cool, but we didn’t care. The water was as warm as a bathtub and we were in heaven!

That day, we constructed a historic drizzle castle, nearly as tall as my waist. It was the Magic Kingdom, complete with real windows (made from clear plastic cups) and Disney collectible figures, recently purchased from my first (and last) trip to Disney World. If only the sand had hardened enough, we could have removed the blue bucket and had a spectacular archway by which to enter the courtyard. 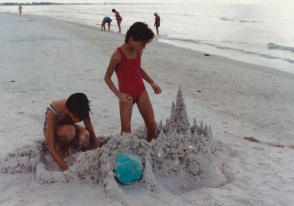 We played in the surf late into the afternoon, refusing to let the exotic adventure come to an end.

Later that winter, my parents would announce their divorce and my life would change forever. But on that day, at the beach, everything was perfect.

Where’s the most beautiful beach you’ve visited? Leave me a comment below.

(P.S. Don’t forget to enter the Pi(e) Day Giveaway this week! The odds of winning are still very good. Only 9 entries so far…)

(P.P.S. If you missed previous Musings, you can binge-read from the beginning.)