Today’s topic is: “Take a walk and tell us what you saw.”

Yesterday was an exciting day! We entered our newly renovated vintage camper van into its first parade to advertise our online business PlateGames.com.

My mother, my aunt Margit (who did a wonderful job of taking all of the photos in this post), and my six-year-old first cousin once removed A. came down from Northfield to help out. It was warm and sunny but not oppressive and most of the time there was a very comfortable breeze.

After spending an hour in the staging parking lot, we were ready to roll.

My husband drove the van while my mom and the children and I handed out scrolls of free travel bingo games to the folks who waved. 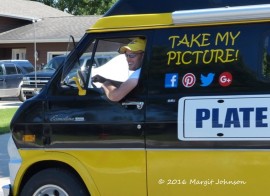 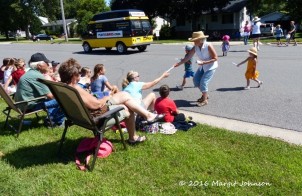 Do you want to know something? When you’re sitting on the curb watching the trucks roll by, they don’t look like they’re moving very fast. But I can tell you that for those who are walking, it is not a stroll in the park.

The children were having a grand time handing out prizes, but my mom and I quickly realized that the van was moving way faster than we were (to stay near the float in front of us). We thought it was the children who were slowing us down, so after the halfway mark, we put them inside… 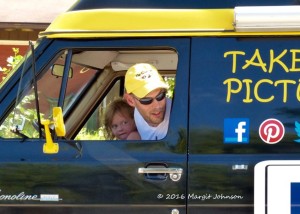 And realized that didn’t seem to make a difference about how far behind we were.

It was shortly after they went in the van that the children realized that being IN the parade meant they weren’t going to get all the candy that was being thrown on the street by the other vehicles. So they started begging to be let out again (not to help hand out prizes but to pick up abandoned sweets.)

About 2/3 of the way through, while huffing and puffing down the road, we ran out of handouts! So my mom started to pass out our business cards that also include a free game on them (albeit in a much smaller format). We gave up hope that we’d be able to stay near the float in front of us, so we let the children out to run along the street and grab a few Starbursts, Jolly Ranchers, and lollipops.

By the time we reached the end, I was completely overheated and exhausted. I wasn’t the only one. The van, which is air-cooled, was almost nearly frying itself during the hour of idling down the street. Luckily, we both recovered during the short yet windy jaunt back to the parking lot. 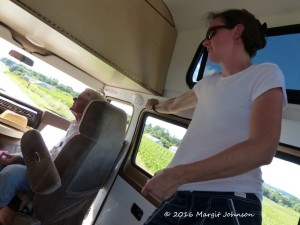 I am so proud of my husband for turning that grimy old van into a fantastic mobile advertisement! And of my mom for embracing the parade spirit, instantly turning into our saleswoman of the year, and even being able to jog part of the way (thanks to those fantastic new knees). And of the children for being so well behaved, despite being hot and missing out on naptime and oodles of candy. And I can’t thank my Auntie enough for being our official parade photographer!

When you see our black and yellow PlateGames van in your neighborhood, take a picture and share it on Facebook using #BeeOnTheLookout to receive a free gift!